At the start of this project, they kept telling us that this week would go by in the blink of an eye. I didn’t believe it. I’d been looking forward to this project since March, when it got postponed indefinitely due to COVID-19 I thought the sheer anticipation of it would slow time enough for me to steadily take it all in. But, damn, they were right.

I’ll start with my subject, Jarir Saadoun. This was the third remote interview I’ve ever done, and, I’ll just say: it came with the most technical difficulties. There was one point where my interviewee Jarir was speaking to me over the phone in one ear, and web editor Jenn de la Fuente was speaking to me over Zoom in the other ear. I actually felt my head spin. Once we figured it out, however, everything flowed from there. We had an amazing interview. This is the first time I’ve done a story on a fellow Arab-American, and there was something so cool about going into an interview already with some level of cultural relatability.

There were so many things about his story that he might’ve had to explain were I not a journalist who shared a similar background as him. For example, he was able to drop Arabic phrases or quips familiar to Arab-Americans, and knew I’d get it. It affirmed to me that this is what I should be doing: giving a platform for people from my community to tell their stories.

I’ve learned so much. At the start of the week, I was reluctant to use Adobe Audition. I was comfortable with the software I was already using, but our audio engineer Selena Seay-Reynolds encouraged me to give it a shot. She showed me the basics and few tricks here and there, and I felt a little better, but not totally comfortable. Once I started editing my audio, there were definitely times where I got frustrated, and times I had to ask for help. But Selena was right — I’m coming out of this week with a whole other audio software in my toolbelt, and that feels pretty amazing. I learned that I actually prefer Audition over what I’ve been using.

I’ve said this several times throughout the week, but Imana Gunawan’s mentorship has kept my head on straight. From her thoughtful edits and constant encouragement, to her cat Diamond’s cameos and bonding over our collection of earrings, I don’t know if I would have made it through the week without her. I’m so grateful to have worked so closely with a media badass who’s also a woman of color who, like Brenda Salinas would say, sees my magic.

Thank you so much to Next Generation Radio for letting me be part of this project! I’ve learned so much and made memories I’ll never forget. 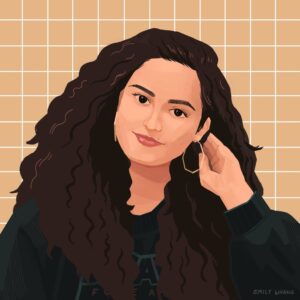 Noor Bouzidi got her start in radio by interning at KCRW in Santa Monica. There, she fell in love with audio storytelling. She is an Algerian American from Redlands, California and speaks four languages: English, Arabic, Spanish, and French. Since the age of 18, she has worked in fashion retail and has amassed an impressive collection of statement earrings. She recently graduated from UCLA with a degree in Linguistics and Anthropology and is now interning with KALW in San Francisco.