The 24-year-old said her son is a happy toddler with a “strong personality,” who loves watching the movie “Despicable Me” as many as three times a day.

What is Larsen Syndrome?

Larsen Syndrome affects the development of bones throughout the body. Babies like Gabriel Posadas are usually born with dislocations of the hips, knees, or elbows. The condition also caused Posadas’ lungs to develop smaller than the lungs of a normal full-term baby.

But the young mother has worried about her son since the day he was born.

Posadas has a rare musculoskeletal genetic disorder called Larsen syndrome, which affects only about 1 in 100,000 babies per year.

“He got all the symptoms associated with it,” Renteria said of her son’s condition, though she said it took doctors six weeks to diagnose him. Sadly, Posadas’ case was severe.

Now, Renteria and her son are facing another crisis: COVID-19.

Posadas hasn’t caught the virus yet, but he’s at-risk. Due to his genetic disorder, Posadas is unable to bend, crawl, roll around, and walk.

“When he was born, his knees were backwards and that’s what affected him the most,” Renteria said of her son’s condition.  He’s also hard of hearing, and is learning sign language.

In order to help with Posadas’ breathing and eating, he is on a ventilator 24/7 and he eats through a gastrostomy tube (also called a G-tube.)

Lisa Duran, one of Posadas’ two home nurses, has been looking after him for a year. She describes Posadas as a “strong little guy.” But when COVID-19 started to spread, her employer instituted strict precautions to keep the toddler safe during a global pandemic.

“If I go to Costco, they do my temperature. [They] ask questions like, have I had a cough? Have I had any chills any [lack of] sense of smell?” Duran said.

Renteria said when COVID-19 started to spread, she considered having the nurses not work.

The family is also struggling to get critical medical supplies as COVID-19 eats up resources.

Gabriel’s medical supply company SuperCare Health is facing a shortage of respiratory equipment, including ventilator circuits – the plastic tubes that connect to Posadas’s at-home ventilator and help him breathe.

That’s a problem because Renteria said the circuits have to be clean, since they’re pushing air inside Gabriel’s lungs. She’s worried they’ll get too dirty if they’re not replaced quickly enough.

In an April statement, SuperCare Health blamed interruptions in manufacturing due to COVID-19 for the product delays.

Renteria said she doesn’t know when they’ll be going back to normal shipments. She’s been forced to use hospital tape to keep some of his ventilator circuits together when they break.

“We literally have to wrap it around where the tears are,” she said.

Posadas’s ventilator humidification filters are also backordered. Renteria said they normally get 30 of them a month, so they can replace them once a day. But she’s been reusing old ones for the past three weeks. That’s not ideal, because it increases the likelihood that contaminants can build up.

“They’re trying to find replacements for him, but those are also out,” Renteria said.

However, Renteria said some things have improved since COVID-19. She’s able to do Posadas’ online therapy sessions now via FaceTime.

“The less people that are around Gabriel, the better,” she said.

But she said going to doctor’s appointments in person are still necessary. That’s a challenge when the hospital only allows one person to come with a patient.

“It’s very overwhelming,” she said. “It’s just a lot of bags and it’s a lot of stuff that I have to carry.

Despite everything, Renteria and her son remain healthy and happy.

“Even with all everything that’s going on, I think there’s still a lot of good moments with Gabriel,” she said. “I mean, [it] doesn’t seem to bother him that we’re not going out, I can’t take him out to the park, or anything like that.”

Renteria said she and her 2-year-old are getting used to the changes.

“Being with Gabriel, I feel like he’s my stress relief. So as long as he’s OK, I think I can suffer a couple months.” 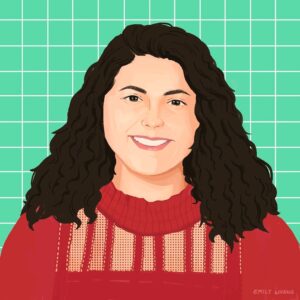 Denae Ayala is a multimedia reporter from Los Angeles. Her drive to share other people’s stories with the world is one of her favorite things about working in journalism. She graduated from Cal State L.A. in 2020 with a degree in Television, Film, and Media Studies with a focus on journalism. As a staff reporter at her alma mater’s newspaper, The University Times, Denae’s ability to listen deeply, ask pointed questions, and produce a compelling story helped earn her four college journalism awards, including Best Sports Feature. But no award is as important to her as the smiles she puts on people’s faces as they read her stories. When she’s not working, Denae enjoys watching sports and rooting for the Dodgers and Lakers.